In this chapter, we’ll look at the different types of boats. At first, you can distinguish between motorboats and sailboats. The motorboats usually have a hull without a keel. The sailboats are divided into dinghies without a keel and yachts with a keel.

The deeper the hull of the ship goes down below the waterline, and the larger the keel is, the more resistance the boat will generate against lateral displacement by wind or when drifting. See the figure below.

Motorboats and sailboats can be powered by an outboard or inboard motor.

The inboard engine is connected to the propeller by a shaft. In most ships, the shaft and propeller are fixed and the ship is steered by a rudder. The effect of the rudder depends on the speed of the ship through the water. The more the water flows around the rudder, the higher the rudder effect.

The propeller is usually located under the hull at stern and it is optimized for forward propulsion. However, additionally, the propeller generates a lateral force that moves the stern to the side. This effect is called prop walk. It is usually unwanted and the effect is highest when the propeller is going reverse. The prop walk can have multiple causes but can be described in a simplified way that can be easily memorized: The propeller rotates and moves along the ground like a wheel and moves the stern to the side accordingly.

The prop walk is practically only relevant with inboard motors with a fixed shaft and propeller. The magnitude of the prop walk is different from ship to ship.

All two engine ships have one right-handed and one left-handed propeller. This way, the prop walk of each propeller is compensated by the other if both engines go forward or reverse together.

Within the Hafenskipper-App there are six ships available.

The motor boat with outboard motor is easy to steer and has no prop walk.

The motor boat with inboard engine, fixed propeller and a rudder has a strong prop walk and is difficult to steer at slow speeds.

The dinghy is very maneuverable and easy to steer. It has no prop walk.

The sailing yacht has an inboard motor and exhibits some prop walk effect. She is heavy with high inertial. The great keel lets her move like driving on rails. The sailing yacht does hardly drift in curves.

This yacht has a left-handed propeller. In reverse, the prop walk moves the stern to the right. Everything else is equal to the yacht described before.

The motor yacht (From Version 1.2) has two propellers and motors that can be controlled individually. This makes the ship very maneuverable at low speeds. If one motor is going forward and the other motor backwards with the same thrust, the ship can turn around its center of gravity.

The catamaran (From Version 1.3) has two propellers and motors like the motor yacht making it also very maneuverable at low speeds. Having two hulls with keels, the catamaran does hardly drift in curves. 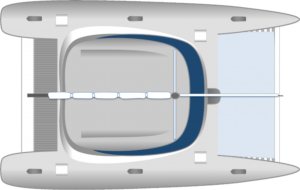 Back to contents of the hafenskipper manual

or go to Chapter 2 – Harbor Information

Get Hafenskipper on the Apple App Store, Google Play Store and Microsoft Store today. The app is available for iPhone, iPad, Android and Windows 10 Phones / Tablets:

This website uses cookies to improve your experience while you navigate through the website. Out of these, the cookies that are categorized as necessary are stored on your browser as they are essential for the working of basic functionalities of the website. We also use third-party cookies that help us analyze and understand how you use this website. These cookies will be stored in your browser only with your consent. You also have the option to opt-out of these cookies. But opting out of some of these cookies may affect your browsing experience.
Necessary Always Enabled
Necessary cookies are absolutely essential for the website to function properly. This category only includes cookies that ensures basic functionalities and security features of the website. These cookies do not store any personal information.
Non-necessary
Any cookies that may not be particularly necessary for the website to function and is used specifically to collect user personal data via analytics, ads, other embedded contents are termed as non-necessary cookies. It is mandatory to procure user consent prior to running these cookies on your website.
SAVE & ACCEPT